NO SIGNATURE(S) ON A SECURITY DEED = NO NOTICE TO BFPs

If there are no signatures [or missing signatures] on a Security Deed [1] recorded in Georgia, then that Security Deed provides NO CONSTRUCTIVE NOTICE to third parties; the Security Deed may be ignored. [2]  U.S. Bank National Association v. Gordon, Supreme Court of Georgia, Supreme Court Case No. S10Q1564 (March 25, 2011). [3]
I thought for a very long time about how to write a “shocking” blog article concerning how “shocking,” is this Georgia Supreme Court Opinion.
However, fundamentally, the U.S. Bank, supra, case stands for the proposition that the Georgia Supreme Court overturned, OCGA § 44-14-33 [4] and simply returned Georgia to the old requirement that constructive notice to all, including bona fide purchasers “BFPs”, shall arise from a properly recorded conveyancing documents and no other.
That is the ruling in a nutshell; the rest is commentary.
Hugh Wood
Atlanta, GA 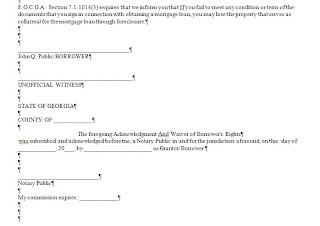 Apparently, Georgia has at least one Order supporting my prediction of September 26, 2010.

In my article "Georgia's Offer of Settlement Statute, OCGA § 9‑11‑68.  The Curious Anomaly of a Low Plaintiff's Offer," I predicted these types of outcomes could happen to Defendants who refuse settle.
http://hughwood.blogspot.com/2010/09/georgias-offer-of-settlement-statute.html
Judge Alvin T. Wong, State Court of DeKalb County, chided the Defendant and its insurance company for proceeding to a jury trial in the face of a $12,000.00 Plaintiff’s offer.  The Defendant got spanked by the jury for a $48,081.30 verdict.  In the face of Defendant's rejection of Plaintiff's offer to settle of $12,000.00, Judge Wong noted that the Plaintiff’s exceeded the Defendant's offer by more than 125 percent (as now required by the new Offer of Settlement Statute in Georgia OCGA § 9‑11‑68) and obtained a judgment almost four times that of Defendant's offer.

Referencing the famous words of David Glasgow Farragut at the Battle of Mobile Bay [1] Judge Wong reminded the Defendant that there was a price to pay for a legal strategy he referred to as "damn the torpedoes, full speed ahead."

The purpose of O.C.G.A. §9-11-68 is to provide a hammer against a litigant who insists on going forward when everything before him or her, or her counsel, or her insurance carrier says settle it, resolve it. During the morning of the motion hearing, in response to the Court's question, counsel for Plaintiff stated in open court that he would waive the 9-11-68 attorney's fees if the Defendant would simply pay the judgment. Defendant's counsel made phone calls but nothing was offered except to proceed ahead.

While this firm has counseled more than one losing Plaintiff (being Plaintiffs who failed to achieve at least 75 percent plus a dollar of Defendant's offer to settle and had attorney's fees awarded against them), it is refreshing to see that the Statute has, in fact, two sharp edges to this sword.

David Glasgow Farragut (July 5, 1801 – August 14, 1870) was the commander-in-chief of the U.S. Navy during the American Civil War. He was both the first vice admiral and full admiral of the Navy. He is remembered in popular culture for his famous order at the Battle of Mobile Bay.   Not that facts would get in the way of emotions, Farragut’s strategy of “damn the torpedoes,” actually worked at the Battle of Mobile Bay.  Farragut overwhelmed the much smaller Confederate fleet led by Admiral Franklin Buchanan and took Mobile on August 5, 1864.  The actual historical quote was, “Damn the Torpedoes.  Go Ahead.”  However, it is generally cited as “Damn the Torpedoes. Full Speed Ahead.”

IN THE STATE COURT OF DEKALB COUNTY
STATE OF GEORGIA
URSULA JOHNSON, Plaintiff
vs.        CIVIL ACTION
PAUL TURNER,       FILE, NO.: 08A981784
Defendant.      )
ORDER
Re: Plaintiff's Motion. To Award Attorney's Fees Against Defendant Pursuant To O.C.G.A.§ 9-11-68, filed November 19, 2010, heard 3/10/2011.
In this personal injury action, the jury returned a verdict for $48,081.30 on November 8, 2010, and the Court entered judgment on November 22, 2010. Plaintiff had given the Defendant an offer of judgment of $12,000 pursuant to O.C.G.A. § 9-11-68 on or about July 13, 2010. The offer included settlement of any claims for punitive damages, attorney's fees or expenses. By letter dated August 13, 2010, Defendant rejected the offer and counter-offered $5,000. Because the jury returned a verdict 125% more than Plaintiff's offer of settlement of $12,000, Plaintiff demands attorney's fees in the full amount of the contingency fee contract of 40%. Alternatively, Plaintiff seeks hourly fees totaling $8,875 for Plaintiff's lead counsel and an attorney assisting in the case. The hourly fees claimed were for work done on behalf of the Plaintiff from the date of the rejection of the offer of settlement which was August 13, 2010, through the entry of judgment.
Under O.C.G.A. 911-68, a trial court has the ability to deny an award of attorney's fees if the court finds the offer of judgment was not made in good faith. Although the Defendant argued the offer to settle in the amount of $12,000 was not made in good faith, Defendant failed to articulate the basis for such an argument and did not submit any evidence in support thereof.
Contrary to this assertion, a demand of $12,000 when special damages are in excess of $10,000 seems quite reasonable, Therefore, as a matter of law, Plaintiff is entitled to an award of attorney's fees. The sole question before this Court is how much.
As a matter of law, an attorney cannot collect a contingency fee until the contingency occurs. Typically in personal injury cases, a plaintiff’s attorney is entitled to the contingency attorney's fees when a case is settled or when it is tried to a verdict. Ellerin & Associates v. Bralwey, 263 Ga. App. 860, 861 (2003). Moreover, if the lawyer was discharged by his client before the contingency occurs, absent contractual provisions addressing the payment of fees, the attorney is only entitled to the equitable remedy of quantum meruit under which the attorney can claim reasonable attorney's fees for services rendered on behalf of the client. Amstead v. McFarland, 279 Ga. App. 765, 770-771 (2006).
This is a case where the Defendant did not contest liability. In other words, the Defendant admitted fault in causing the accident. The Defendant was also made aware that medical expenses involved in this case exceeded $10,000 as early as filing of the complaint. It should be noted in defending this case where the only contest is causation of damages, the Defendant failed to put up any medical evidence that Plaintiff was not injured or injured to the extent she contends.
The purpose of O.C.G.A. §9-11-68 is to provide a hammer against a litigant who insists on going forward when everything before him or her, or her counsel, or her insurance carrier says settle it, resolve it. During the morning of the motion hearing, in response to the Court's question, counsel for Plaintiff stated in open court that he would waive the 9-11-68 attorney's fees if the Defendant would simply pay the judgment. Defendant's counsel made phone calls but nothing was offered except to proceed ahead.
There is no reason in this case for the Court not to exercise its discretion and award attorney's fees in the, full amount of the contingency of $19,232,52. The Court recognizes that it has the discretion to award hourly fees of $8,875 which was hourly work done from the date the offer of settlement was rejected until the date the verdict was returned. However, it is well settled law that a plaintiff's attorney is not entitled to a fee until the contingency occurs. This case was tried to a verdict There is no reason the Plaintiff should not recover the full statutory benefit of O.C.G.A. 9-11-68. There is a price for "damn the torpedoes, full speed ahead." The Court orders the Defendant to pay attorney's fees under O.C.G.A. § 9-11-68 in the amount of $19,232.52.
SO ORDERED, this  14- day of March 2011.
ALVIN T. WONG
State Court of DeKalb County