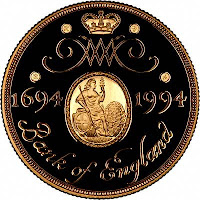 Oh! I have been so far off in my attempt to determine what financial year we are reliving in this present recession (depression). I have variously argued it is a repeat of 1937 (the last year Toyota posted a loss) and 1931 (the last year Wall Street fell close to 40% in one year.)

However, how far I was off and how desperate these financial times must be.

We have to go back to 1913 (the founding of the US Federal Reserve) to find a collapsed rate.

We have to go back to 1882 to the founding of the Bank of Japan (at the end of the to Meiji Restoration) to find anything close to today’s rate. In fact, there is no rate in history near the current 0.001% interest rate presently offered by the Bank of Japan. Why have an interest rate at that return?
1694? Really. It was the year Voltaire was born. Born - not died.

Perhaps, given the last 700bn the feds just floated, the automaker bailout and the 1.35T stimulus package proposed by Barak Obama, Voltaire’s quote was prescient.

"In general, the art of government consists of taking as much money as possible from one class of citizens to give to another. " Voltaire

CNN's poll today asked its readers when they thought the economic downturn would break. To my astonishment, and perhaps horror, 61% of participants said it would not end until after Obama served four (4) years.

Some clients have asked me (I'm not their financial advisor) what they should do now. Some have lot millions of dollars in their stock portfolios. For the first time in my entire life, I now argue that they should sit on the sidelines in cash. For a while (and this is not market timing) they should just watch common stocks. True, stocks have gone up every year from the 1930s to the present (well, near the present). However, this data is/are [pick whichever Latin plural floats your boat; both are now considered standard] showing that the current downturn is not a normal post WWII financial downturn.

We have never seen this downturn before in our lifetime. We have to look backwards 315 years to the founding of the Bank of England to find a similiar financial time.

Welcome to a voyage into the financial unknown.

LONDON (AP) -- The Bank of England on Thursday cut interest rates to the lowest level in its 315-year history, taking it into uncharted territory as it attempts to ward off a prolonged recession.
The half point cut in interest rates -- to 1.5 percent -- sees the central bank nearing the limits of conventional monetary policy after trims totaling 3.5 percentage points since the beginning of October and as Britain faces its bleakest year since the early 1990s recession.
The bank's nine-member monetary policy committee said the world economy "appears to be undergoing an unusually sharp and synchronized downturn."
"Measures of business and consumer confidence have fallen markedly," it said in a statement accompanying its decision. "World trade growth this year is likely to be the weakest for some considerable time."
The half a percentage point cut was less dramatic than the 1.5 point trim it announced in November, and lower than the 1 point cut expected by some economists -- but still brings the rate down to the lowest level since the Bank of England was founded in 1694.
The move follows aggressive cuts by other central banks. The U.S. Federal Reserve has already slashed its key interest rate to a record low, at a range of zero to 0.25 percent, while the Bank of Japan has dropped its rate to almost nothing, at 0.1 percent.
The Bank of England's latest decision widens the gap between Britain and the euro zone, where the European Central Bank also recently cut rates to the current 2.5 percent. The ECB is now facing increasing pressure to plump for a larger downward move when it announces its monthly decision on Jan. 15.
But analysts warned that the expected future cuts both in Britain and the euro zone will have an increasingly diminishing effect.
"There is no doubt that further rate cuts will take place in the coming months, and we expect to see base rates at around 0.5 per cent by the summer," said Ben Read, an economist at the London-based Centre for Economics and Business Research. "However, with rates now at an all-time low, the marginal impact of any further rate cuts will be minor."
That leaves Britain facing a difficult period of slow or stagnant economic growth and potential deflation.
House prices have suffered their worst year on record, the huge services sector is shrinking at record pace and several major retailers have collapsed as consumers curb spending.
A warning in the Bank of England's latest credit conditions survey that lending to households and businesses is set to fall further in the first quarter of this year is likely to lead to more house price falls, corporate failures, and rising unemployment.
After a period of surging inflation -- inflation is currently running at 4.1 percent -- policy makers are now more worried about inflation falling below the government's 2 percent target or turning negative. Deflation, a sustained drop in prices, can be disastrous for an economy by discouraging people from spending as wages fall and unemployment rises.
Whether the lower rates will have the desired impact of jump-starting the economy is debatable, as many banks and other lenders have been slow to pass on previous cuts.
Nationwide, the country's biggest building society, has already said it plans to invoke a "collar" clause enabling it to stop reducing rates on most of its tracker mortgages, which are designed to follow the benchmark interest rate.
In contrast, banks have been quick to pass on the lower rates to savers, who have watched the value of their nest eggs decline in real terms. Lower savings are unlikely to encourage consumer spending and impede mortgage lenders' ability to attract deposits.
"The market is still not functioning properly and is likely to lead to a fragmented approach by lenders, as they try to balance the interests of savers and borrowers and other pressures on their businesses, in responding to today's announcement," said Michael Coogan, director-general of the Council of Mortgage Lenders.
The pound rose after the announcement to 89.28 pence per euro and $1.5181 as the cut fell short of the larger cut expected by many economists. Cutting interest rates can undermine a currency as investors seek higher returns elsewhere.
Meanwhile, Treasury chief Alistair Darling moved to quash speculation that the government was planning to print money to ease the impact of recession after he told the Financial Times in an interview published Wednesday that he was considering a policy of "quantitative easing."
"Nobody is talking about printing money," he told reporters after a Cabinet meeting on Thursday. "There's a debate to be had about what you do to support the economy as interest rates approach zero, as they are in the United States. But for us that is an entirely hypothetical debate."
Prime Minister Gordon Brown has said that with interest rates close to zero, the government should take fiscal action, hinting at further tax cuts and increased government spending
& & &
Posted by Hugh Wood at 9:33 PM

Good article. Some free banking defenders call 1694 "the year big evil was born". Bank of England was established in order to finance Kings war. Central banking was born in order to rise power of the ruler. Now, they try to look like protectors of the economy, but their true character should be never forgotten!
Regards,
Jay