The Current Bailout is A Train Wreck 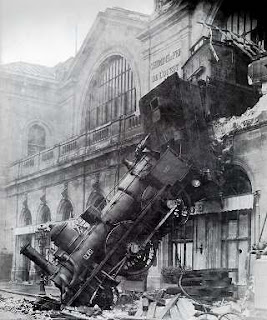 The Current Effort to bailout US and Foreign Banks with 700B of US Taxpayer Money seems to be stuck in political limbo. After Congressional leaders indicated Thursday, September 25, 2008, that they had reached a compromise, house Republicans announced angrily that they refused to extend a blank check to the Administration. Republicans stated that they refused to commit US financial markets to a new Socialist Central Managed Economy (does the old “5 year plan” come to mind, Comrade? CCCP?) and tie executive compensation to statutory Congressional mandates.

When you consider that 150B would provide complete and fully paid healthcare for the entire United States, illegals and all, these dollars thrown at past banking errors simply should not be tolerated.

Do something? Perhaps. But start on a scale 1/5 or ¼ as large. Oh! Dire Consequences! The last time we wrote a blank check it was “The Sky is Falling,” and they have “Weapons of Mass Destruction.” And before the conservatives attack me, I have a fairly unbroken “red” state voting record.

Maybe the world markets will collapse. If they collapse, they will come back as some point. When they do, they will still be “markets.” This claptrap 700B ensures that the United States will forever enter the Financial Twilight Zone of the Post 1945 UK-Labour Governments and Franco Managed Economies.

If we do do it, then we should demand that the taxpayers get pure equity for their investment as either as warrants or preferred stock. We should not write a blank check.

A banking system in crisis after the collapse of a housing bubble. An economy hemorrhaging jobs. A market-oriented government struggling to stem the panic. Sound familiar?

It does to Sweden. The country was so far in the hole in 1992 - after years of imprudent regulation, short-sighted economic policy and the end of its property boom - that its banking system was, for all practical purposes, insolvent. But Sweden took a different course than the one now being proposed by the United States Treasury. And Swedish officials say there are lessons from their own nightmare that Washington may be missing.

Sweden did not just bail out its financial institutions by having the government take over the bad debts. It extracted pounds of flesh from bank shareholders before writing checks. Banks had to write down losses and issue warrants to the government.

That strategy held banks responsible and turned the government into an owner. When distressed assets were sold, the profits flowed to taxpayers, and the government was able to recoup more money later by selling its shares in the companies as well.

"If I go into a bank," said Bo Lundgren, who was Sweden's finance minister at the time, "I'd rather get equity so that there is some upside for the taxpayer." Sweden spent 4 percent of its gross domestic product, or 65 billion kronor, the equivalent of $11.7 billion at the time, or $18.3 billion in today's dollars, to rescue ailing banks. That is slightly less, proportionate to the national economy, than the $700 billion, or roughly 5 percent of gross domestic product, that the Bush administration estimates its own move will cost in the United States.

But the final cost to Sweden ended up being less than 2 percent of its G.D.P. Some officials say they believe it was closer to zero, depending on how certain rates of return are calculated.

The tumultuous events of the last few weeks have produced a lot of tight-lipped nods in Stockholm. Mr. Lundgren even made the rounds in New York in early September, explaining what the country did in the early 1990s.

A few American commentators have proposed that the United States government extract equity from banks as a price for their rescue. But it does not seem to be under serious consideration yet in the Bush administration or Congress.

The reason is not quite clear. The government has already swapped its sovereign guarantee for equity in Fannie Mae and Freddie Mac, the mortgage finance institutions, and the American International Group, the global insurance giant.
Putting taxpayers on the hook without anything in return could be a mistake, said Urban Backstrom, a senior Swedish finance ministry official at the time. "The public will not support a plan if you leave the former shareholders with anything," he said.

The Swedish crisis had strikingly similar origins to the American one, and its neighbors, Norway and Finland, were hobbled to the point of needing a government bailout to escape the morass as well.

Financial deregulation in the 1980s fed a frenzy of real estate lending by Sweden's banks, which did not worry enough about whether the value of their collateral might evaporate in tougher times.

Property prices imploded. The bubble deflated fast in 1991 and 1992. A vain effort to defend Sweden's currency, the krona, caused overnight interest rates to spike at one point to 500 percent. The Swedish economy contracted for two consecutive years after a long expansion, and unemployment, at 3 percent in 1990, quadrupled in three years.

After a series of bank failures and ad hoc solutions, the moment of truth arrived in September 1992, when the government of Prime Minister Carl Bildt decided it was time to clear the decks.

Standing shoulder-to-shoulder with the opposition center-left, Mr. Bildt's conservative government announced that the Swedish state would guarantee all bank deposits and creditors of the nation's 114 banks. Sweden formed a new agency to supervise institutions that needed recapitalization, and another that sold off the assets, mainly real estate, that the banks held as collateral.

Sweden told its banks to write down their losses promptly before coming to the state for recapitalization. Facing its own problem later in the decade, Japan made the mistake of dragging this process out, delaying a solution for years.

Then came the imperative to bleed shareholders first. Mr. Lundgren recalls a conversation with Peter Wallenberg, at the time chairman of SEB, Sweden's largest bank. Mr. Wallenberg, the scion of the country's most famous family and steward of large chunks of its economy, heard that there would be no sacred cows.

The Wallenbergs turned around and arranged a recapitalization on their own, obviating the need for a bailout. SEB turned a profit the following year, 1993.
"For every krona we put into the bank, we wanted the same influence," Mr. Lundgren said. "That ensured that we did not have to go into certain banks at all."

By the end of the crisis, the Swedish government had seized a vast portion of the banking sector, and the agency had mostly fulfilled its hard-nosed mandate to drain share capital before injecting cash. When markets stabilized, the Swedish state then reaped the benefits by taking the banks public again.

More money may yet come into official coffers. The government still owns 19.9 percent of Nordea, a Stockholm bank that was fully nationalized and is now a highly regarded giant in Scandinavia and the Baltic Sea region.
The politics of Sweden's crisis management were similarly tough-minded, though much quieter.

Soon after the plan was announced, the Swedish government found that international confidence returned more quickly than expected, easing pressure on its currency and bringing money back into the country. The center-left opposition, while wary that the government might yet let the banks off the hook, made its points about penalizing shareholders privately.
"The only thing that held back an avalanche was the hope that the system was holding," said Leif Pagrotzky, a senior member of the opposition at the time. "In public we stuck together 100 percent, but we fought behind the scenes."