Home to Grandfather's House for Christmas 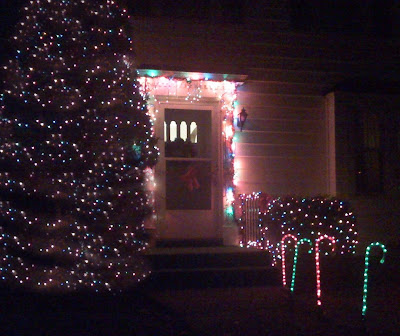 We trekked some 400 miles across country to be with my elderly father on Christmas Day. While to the adults much of the trip is packing, waiting in line and traffic, to a nine (9) year old, it is still magic.

Out of the gifts, the travel arrangements, the packing, the thing I will remember the most about this Christmas (2008) was my son's encounter with Santa Clause. After having met with "Santa," he remembered he had "forgotten" a very significant present. My weak statement that, "Santa probably knows about that game you want," went nowhere.

We went back, stood in line, and "told" "Santa," about the very special game that must come on Christmas Day.

Its so trite, so hackneyed (nice word for a Christmas story), but I watched him tell Santa with all the "importance of being earnest" that Santa must "add" this one game to his list.

Santa dutifully said that he would and that Parker should have known that Santa already knew his Christmas List - responding to my 'wink' 15 feet away.

And, I reminded Santa that we would be at "Grandfather's house" on Christmas Day. Santa, apparently the "hi tech" Santa, shrugged it off and said that his elves now take care of all the GPS and routing details. And, in the world of UPS and USPS online "tracking," it made perfect sense to my 9 year old.

So, we left Santa -- well certain that the "game" would arrive at Grandfather's house on Christmas Day.

And, off to packing, the smell of pine trees, cinnamon sticks, Holiday Muzak®, grapefruit from someplace called "Indian River," a holiday party where last years pants didn't fit quite as well as the year before, a Holiday Card that said they donated your Christmas Gift to the Welcome Wagon®, or some other equally obscure organization and then ...

When we finally got in eyesight of Grandfather's House (my father, Parker's Grandfather), I was surprised to see Christmas Lights all around.

Apparently, the people who take care of Grandfather put up some Christmas lights.

However, out of all the lights this Christmas, they were, in some odd way, the most meaningful and most inviting.
Merry Christmas and Happy Holidays to you all.