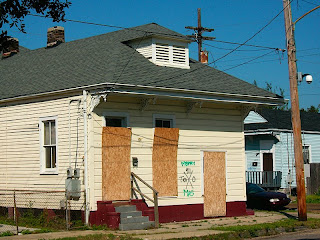 Many of these properties were purchased by third parties that could not rent them and/or the lender has simply given up on attempts to sell these foreclosed properties. These foreclosures have left hundreds of homes abandoned and vacant in DeKalb County.
The Housing Economic and Recovery Act of 2008 became law on July 30, 2008. It allocated 3.92bn dollars to all States for the purchase, rehabilitation and sale of housing as to be directed by the U.S. Department of Housing and Urban Development. As part of that law, every state became eligible for direct grants to ameliorate the ravages of these rampant foreclosures.


Based on HUD’s recently issued regulations, DeKalb County, Georgia will be entitled to $18,545,013.00 in direct grants to purchase blighted homes, as long as the funds are expended by DeKalb County according to section 102 of the Housing and Community Development Act of 1974 (42 U.S.C. 5302).


Given that these foreclosed homes may be purchased substantially below their original sale value, DeKalb may be poised to purchase and rehabilitate somewhere between 100 to 200 hundred blighted properties.


This should provide significant improvement and relief to the many neighborhoods in DeKalb that are suffering from abandoned with unkempt and overgrown yards.
The relevant text of HUD memos on this new Regulation are listed below.

Methodology for Allocation of $3.92 billion of Emergency Assistance for the Redevelopment of Abandoned and Foreclosed Homes

Section 2301 of the Housing and Economic Recovery Act of 2008 calls for allocating $3.92 billion for state and local governments (as such terms are defined in section 102 of the Housing and Community Development Act of 1974 (42 U.S.C. 5302)) for emergency assistance with redeveloping abandoned and foreclosed homes. The statute calls for the funds to be used to:

The statute directs that the funds be allocated to “States and units of general local government with the greatest need, as such need is determined in the discretion of the Secretary based on

It further notes that the formula is to be developed within 60 days of enactment (2301(c)) and that no state shall receive less than 0.5 percent of the amount appropriated (2302).

The statute also provides direction to grantees that they should give priority emphasis in targeting the funds that they receive to “those metropolitan areas, metropolitan cities, urban areas, rural areas, low- and moderate-income areas, and other areas with the greatest need, including those--
(A) with the greatest percentage of home foreclosures;
(B) with the highest percentage of homes financed by a subprime mortgage related loan; and
(C) identified by the State or unit of general local government as likely to face a significant rise in the rate of home foreclosures.” (2301(c)(2))

Because this funding is one-time funding and the eligible activities under the program are different enough from the regular program, HUD believes that a grantee must receive a minimum amount of $2 million to have adequate staffing to properly administer the program effectively. In addition, fewer grants will allow HUD staff to more effectively monitor grantees to ensure proper implementation of the program and reduce the risk for fraud, waste, and abuse.

· Minimum Grant to States. The statute calls for no state (including Puerto Rico) to receive less than 0.5 percent of the appropriation. This equates to $19.6 million as a minimum grant for each state government. To meet this requirement, HUD first allocates funds based on relative need (see below) to each state as a whole (both entitled and non-entitled areas). If the state as a whole would receive less than $19.6 million, the state total is increased to $19.6 million. Sub allocations to the state government and local governments are then made as follows:

Note, this approach provides state governments with proportionally more funding than their estimated need under the assumption that state governments will serve both those areas not receiving a direct grant and those areas that do receive a direct grant, making sure that the total of all funds in the state are going proportionally more to those places (as prescribed by the statute):

· Two step allocation - statewide allocation. The statute calls for allocating funds based on the number and percent of foreclosures, subprime loans, and loans delinquent or default. HUD staff experience is that the best source of data on those factors comes from the Mortgage Bankers Association National Delinquency Survey (MBA-NDS). This survey has been conducted for over 30 years and provides information on more than 70 percent of all active mortgages every quarter. The data are available at the state level. For the subprime and delinquency variables, HUD uses data from the second quarter of 2008. For foreclosures, HUD uses the sum of all foreclosure starts for all of 2007 and the first half of 2008.[1]

However, because the MBA-NDS only covers about 70 percent of all active mortgages, and the distribution in coverage could be different from state-to-state, HUD adjusts the MBA-NDS data using (a) statewide data from the 2006 American Community Survey on number of owner-occupied dwelling with a mortgage and (b) increases that number by the fraction of mortgages made between 2004 and 2006 that were investor-owned in the Home Mortgage Disclosure Act (HMDA) data[2]. Since approximately 44 percent of single-family rental units have a mortgage (2001 Residential Finance Survey) and the investor owned properties are a significant contributor to the inventory of foreclosed homes, HUD staff believe it is important that loans made to investors be included in estimating the statewide total of mortgages in place, particularly since homeownership rates vary from state to state.

The statewide allocation is calculated using the following formula:

Where the rate of a foreclosures, subprime loans, defaults, or delinquencies in a state relative to the national rate of that problem cannot increase or reduce a state’s share of the problem by more than 30 percent and a state’s vacancy rate difference relative to the national average cannot increase or decrease a state’s proportional share of the problems by more than 10 percent.[4] If a statewide allocation is less than $19.6 million, the statewide grant is increased to $19.6 million. Because this approach will result in a total allocation in excess of appropriation, all grants above $19.6 million are reduced pro-rata to make the total allocation equal to the total appropriation.

The statute specifies that funds be targeted toward the places most likely to need assistance with addressing the problems associated with abandoned homes due to foreclosure. To ensure that the funds not only target to foreclosure, but also to abandonment caused by foreclosure, HUD adjusts a state’s proportional share of need associated with foreclosures, subprime loans, and defaults and delinquencies upward for states with relatively higher rates of vacancies of 90 days or more when those vacancies are in neighborhoods with high concentrations of high-cost loans. States with lower rates of vacancies have their share of need adjusted downward. Because high rates of high cost loans are a good predictor of foreclosures, HUD uses the 90-day vacancy information from the United States Postal Service as of June 2008 in those neighborhoods with a high rate of high cost loans as a proxy to predict abandonment risk. As noted above, a state’s share of overall need can only be adjusted up or down by 10 percent using this factor.

· Two step allocation - sub-state allocation. Substate allocations work like a mini-formula. The appropriation amount is the amount calculated for the statewide allocation. A new formula is then applied to divide that “pie” up among the CDBG eligible grantees within that state.

Data on foreclosures, subprime loans, and delinquencies are available from various private sources at county, zip code, and metropolitan levels. Those sources, however, have varying levels of coverage and transparency as to how the data are collected and aggregated. In addition, the short time frames needed to make this allocation made it unlikely that access to these private data could be negotiated with the vendors in a timely manner to meet the deadlines for this allocation. There are no public data sources collected evenly across the United States on most foreclosures, delinquencies, and subprime loans. Nonetheless, there are data from public data sources that can reliably predict where the foreclosure crisis is occurring or may occur. HUD analysis shows that 75 percent of the variance between states on foreclosure rates can be explained by three variables available from public data:

o Office of Federal Housing Enterprise Oversight (OFHEO) data on decline in home values as of June 2008 compared to peak home value since 2000.
o Federal Reserve Home Mortgage Disclosure Act (HMDA) data on percent of all loans made between 2004 and 2006 that are high cost.
o Labor Department data on unemployment rates in places and counties as of June 2008.

Because these three variables are publicly available for all CDBG eligible communities and they are good predictors of foreclosure risk, HUD used them to estimate foreclosure rates in each jurisdiction within a state.

Using a simple linear regression, we created a model to estimate the foreclosure rate for each entitlement community, using the following formula:[6]

Each jurisdiction’s allocation is thus calculated as follows:

Where the vacancy rate adjustment can’t increase or reduced a local jurisdiction’s allocation by more than 30 percent.

Local governments with an allocation of less than $2 million have their grants rolled into the state government grant allocation.
[1] HUD elected to use this measure of “foreclosure starts” over a period of time rather than “currently in foreclosure” because we wanted to capture the volume of foreclosures independent of state laws and other actions locally that may affect how long a property is in the foreclosure process.
[2] This is calculated as total mortgages = ACS Owner Occupied with mortgage *[1+(HMDA investor mortgages/HMDA renter mortgages)].
[3] Vacancy data are from a June 2008 extract of USPS data on addresses vacant for 90 days or longer in urban areas. Data on high cost loans are based on the sum of HMDA data for 2004 to 2006 on loans being made at 3 basis points or more above prime. The vacancy rate is calculated as the sum of vacant addresses in areas with high cost loans divided by all addresses in the state. The national rate is 1.1 percent.
[4] HUD was unable to identify reliable data on foreclosures, subprime loans, or delinquencies for the Insular areas. As such, HUD estimated insular area rates using the same model as it uses for the substate allocations. Only unemployment rate is used because there are not OFHEO or HMDA data available for insular areas.
[5] Delinquency rates and subprime rates correlate very highly with the foreclosure rate. As such, changing the weights has only a small impact on actual allocations.
[6] This regression has an R-square of 0.750 (correlation 0.866).
[7] A high cost loans is one with a rate spread is 3 percentage points above the Treasury security of comparable maturity.
[8] Unemployment rate is capped at 10 percent to correct for anomalies in the estimated foreclosure rate created by extremely high unemployment rates.
[9] This model also has high predictive value relative to other sources of data on foreclosures and subprime loans. Relative to the rate of statewide foreclosures from the private vendor RealtyTrac, this model has a correlation of 0.784. Relative to the rate of problems for subprime and Alt-A loans available from First American Core Logic, the correlation is 0.846. Relative to the 90 day delinquency rate from Equifax data, the correlation is 0.893. In general, all of these measures correlate well with each other, but the correlation of the model against each of these measures is often higher than they are with one another.
Posted by Hugh Wood at 8:42 PM