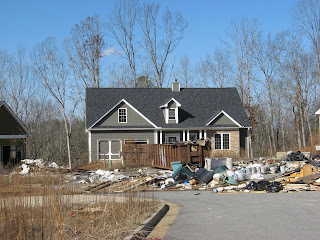 Georgia as a "title" state poses new problems for Lenders in REO. While the phenomenon of holding property post foreclosure by a lender is not a new concept, the current situation presents new problems and thorny issues for banks.

Banks have traditionally attempted to foreclose and then discharge their ownership out of REO as quickly as possible. The current market downturn (read that: recession in other industries; depression in real estate) is presenting code violation problems and "ownership" problems never contemplated before by lenders.

In the current market environment, lenders are finding themselves full "owners" of property for timeframes that now stretch into years. While lenders past goals have simply been to clean up the property and list it for resale, lenders now must examine the very real possibility that they will be required to: pave roads, install sewers, abate stormwater runoff, resolve environmental issues and defend themselves against local code violations.

These financial issues were never budgeted when the lenders initiated the loans and these payments for fines can only come out of the bank earnings - not the foreclosed value of the secured property. The payment for abtement, additionally, must be paid out of bank earnings. The reason that the secured property cannot pay the freight is simple economics. In a rising market value, the property either never reaches foreclosure or, if it does, it is quickly resold. In a declining market (here a rapidly declining market), the property is "negative," or "upside down," when the bank takes it REO at the foreclosure sale. There are no funds out of which to cover the deficiency and there are no funds to cover the "support" of the property. In a more robust market, the "support," was simply added (as much as possible) into the resale price; the support costs were recovered (as much as possible) in the subsequent sale from REO to the new owner.

Here, there is no new owner. Banks are faced with the possibility that these properties may remain on their REO books for a year or more. Until the recent spate of FDIC takeovers, lenders had ignored this issue. However, that is unlikely to continue.

[ This segment of the Article has been redacted. No member of the public is authorized to use the name of our firm without written permission and/or entering into an attorney client relationship with us. Any use of our name without our permission is strictly prohibited. Hugh Wood, Wood & Meredith, LLP, Atlanta, GA ]

These issues are coming to the surface in Georgia and other states.

Recently the Georgia Business Chronicle wrote of on this issue as follows:

As banks take back more lots and homes from bankrupt builders, the dirt washed away from these sites during each rainstorm is adding millions in costs statewide to their new owners.

Erosion control and other environmental issues at abandoned and foreclosed residential projects are becoming an unforeseen, but possibly large, cost for metro banks already struggling to survive. “The potential here to grow into a bigger issue is just huge,” said Bert Langley, the Mountain District manager for the Georgia Environmental Protection Division (EPD), the main state agency charged with overseeing environmental compliance at developments.

Under state law, developers and builders are required to limit erosion.
The laws are the reason for the ubiquitous black and orange silt fences at residential projects, and limiting other damage to water sources and other land.
But as builders shut their doors and banks take back lots and homes by the hundreds, compliance with those environmental laws is lapsing.

For now, according to state data, the problem is still small.
Georgia's EPD assessed $68,650 in fines in 2007 and has assessed $56,678 thus far this year, according to agency data. Those fines are concentrated in the state's rural counties, as Georgia's metro counties oversee these issues locally.

Most banks, local and state regulators said, are either unaware of the erosion control and other environmental issues at foreclosed properties, or see the cost of correcting any violations as optional when saddled with declining real estate values and other rising costs.

"They get this deer-in-the-headlights look when you tell them about this stuff," Langley said.

Some banks are being proactive.

Langley estimates there are 6,000 construction projects across his 37-county district, which stretches across the northern portion of the state and does not include Forsyth County.

Two-thirds of those projects are currently stalled.

With an eight-person enforcement team, Langley said his division is unable to monitor all sites, and relies largely on complaints.

Phil Mallon, Fayette County's director of public works, said his county has overseen two major subdivisions foreclosed by banks. But Mallon said his larger concern is those developments where construction stopped but the bank has not foreclosed. “Dealing with some of these sites is frustrating. You can't find the owner or the right person to talk to about complying with state law," Mallon said.

Bankers and regulators are facing this wave of new compliance issues for the first time in a housing downturn. "I've never seen anything like this in my career," said Steve Dempsey, a Forsyth County stormwater engineer who oversees erosion issues. Georgia's erosion control laws were last overhauled in 2000, when local and state agencies were brought under one standard of environmental controls.

Fines can cost as little as a few hundred dollars per day, or tens of thousands, when property owners are not compliant with state law. The fines stick to the property itself, rather than the owner. For banks taking back dozens of properties after builders have not maintained the sites for months, the fines can add up, and are passed along to the new owner. The cost to make a site compliant can be as little as a few thousand dollars for a single site, to hundreds of thousands for an entire subdivision.

With thousands of properties being seized by banks, the costs can quickly scale into the millions. Dempsey said Forsyth County is working with banks to minimize fines, but cannot eliminate them entirely.

One subdivision in Forsyth County is an example of the emerging problem.
The Greenleaf subdivision is located just outside Dawsonville on the eastern edge of the county. The property was bought for $1.97 million, according to a civil lawsuit filed by Gainesville Bank & Trust in 2006.

Since then, the land has been largely untouched, after some of the builders and developers of the site were convicted earlier this year of mortgage fraud.
The site now sits vacant, and no work is being done on the few built homes.
Bankers familiar with the project said the fines assessed by the county for erosion control exceed $4 million, roughly twice the value of the property.
Dempsey declined to comment on the subdivision, citing pending litigation.
© Atlanta Business Chron.

Frustrated by the increasing number of foreclosed properties sitting vacant and untended, cities across the country are responding with ordinances that require the owners--the lenders that took back the houses--to maintain the properties or face heavy fines.

The California legislature is expected next week to pass a statewide law that would allow local governments to assess a fine of up to $1,000 a day on the owners of foreclosed properties who don’t maintain them. The bill also has strict requirements for notifying mortgage holders that the foreclosure process has started, and gives tenants living in a foreclosed property additional time to move. Considered an urgency measure, the bill would take effect immediately after being signed by the governor.

The Rhode Island General Assembly also has sent its governor a bill to sign, the Rhode Island Foreclosed Property Upkeep Act. It requires any financial institution that purchases a foreclosed property to post a bond with the municipality for 25 percent of the property’s assessed value, to be used to correct any code violations if the owner doesn’t take care of it. If the full value of the bond is used in the upkeep of the property, the owner has 10 days to file another bond in the same amount or have the property forfeited to the municipality.

Cathedral City, located in what was once the white-hot real estate market of Riverside County, Calif., is one of the cities that has recently passed laws requiring owners of foreclosed properties to register the property with the city. Among other requirements, the ordinance requires owners to pay a $70 annual registration fee, secure the property, keep it free of debris, landscape the front and side yards to neighborhood standards, clean or drain the pool, and hire a local property manager to inspect it weekly.

The procedures for enforcing the ordinance, which was passed this spring, are still being worked out, says William Soqui, chief of the Cathedral City Fire Department, which oversees code enforcement for the city.

He’s thrilled to have a mechanism to address the problems associated with the 2,000 foreclosed properties currently sitting vacant in this California desert community. The empty houses have been broken into by gang members and drug addicts, who vandalize them or use them as bases for criminal activities. Stagnant swimming pools have created breeding grounds for mosquitoes and drowning hazards.

“Keeping them crime-free and making sure they’re secured and in a condition that they’re not dragging down other property values is a daunting task,” Soqui says.
The ordinance addresses the biggest problem his department has with foreclosed properties, which is simply keeping track of who owns it.

“We’ve had to hunt for the owners and that’s been difficult,” Soqui says. “The loans get sold from one company to another. This is for us to have someone we can contact on our local level to deal with issues going on at a specific property. We can’t do anything about the foreclosure, unfortunately, but we can bring the property up to the standard of the community.”

Hi Hugh,
My name is John Dunn and I am a Paralegal, Legal Researcher and Mortgage & Auto Auditor.

I have a question pertaining to the Securitization of a Mortgage Note.

When a Note is converted into a Bond, the value of the Note is no longer exists and now is in the bond(s).

How can a Lender (Note Holder) or even the beneficiaries of the Trust Foreclose on the NOTE?

Nice piece! But I have same question as John How can a Lender of the Trust Foreclose on the NOTE?

The first time that I Buy Viagra I felt a little uncertain but after use and compare Viagra with Generic Viagra I realized that it's a great product despite the brand or the pharmacy where you can buy the pill. Did you know ? there's a lot of controversy around Viagra, where to find Cheap Viagra . However is the same if you buy Viagra Without Prescription in a physical or Viagra Online Without Prescription via internet

What is RIO means? where is that?

This is really interesting, You are a very skilled blogger. I’ve joined your rss feed and look forward to seeking more of your excellent post