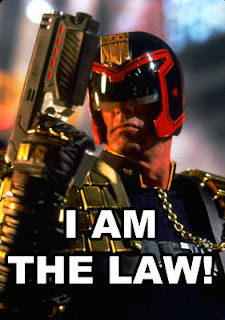 When Secretary Paulson originally begged the House of Representatives for 700bn with his little 3 page Bill, the House objected, partially, because there was “no judicial oversight” of the Secretary’s actions.

Unless I missed something, Congress has passed (in its final version) a Bill that substantially insulates the Secretary from any meaningful judicial review. Congress has created some oversight to oversee (vaguely) what he invests in, when he sells managed assets and how much money is returned to the Treasury (if any) from those sales.

His actions may only be set aside if they are “unconstitutional.” While possible to craft such a constitutional claim against a sitting US Secretary, its technically unlikely. It’s the standard that was used to overturn the District of Columbia’s gun ban. That only took 10 years of litigation to the United States Supreme Court to obtain review on the standard of “unconstitutional.” Thus, practically, there is no judicial review of the Secretary of the Treasury’s actions.

Any judicial action seeking an injunction, whether temporary or permanent, is stayed before it begins. Gee, that is almost a standard of protection I have never seen before. Injunctions – dead on arrival.

If you take his money $$$$$, you give up your right to sue. If you are one of the companies, banks or investment firms that wish to sell your toxic assets to the Secretary, you waive any right to sue when you accept his money. That was a cool; it would be interesting to see if private companies or private citizens could ever obtain such legal immunity.

With regard to the little homeowner’s mortgage and related foreclosure – no effect; no legal bar. Any claims that could have been asserted are still there. Section 109 is just a bulletproof vest for the Secretary of the Treasury, not anyone else.

Oh, and its not mutual. The Secretary can sue you, but you can’t sue him back.

What a deal. Don't you just love rushed legislation.

eToro is the most recommended forex broker for newbie and professional traders.